Before They Are Yours

Yesterday I woke up with a nagging sense of dread coupled with a little tinge of excitement.  The major task we were to undertake yesterday was "roaming".   Roaming is the act of taking an older child out into the community to trying and locate his birth family.  In this case, our newest resident, J (far left in this photo) along with me, my awesome social worker, my husband and our youngest son set out to  roam.
Before we ever set foot in the car or set a destination into our GPS, I started the day with prayer, always asking the Lord to help us find the birth parents and discern HIS will for the future of this child.  Since our resident is already 11 years old, has been on the streets for two years and only remembers a very old address, we had little to go on but "go", we did.
What we encountered was not in the script but was clearly the hand of God guiding us in His sovereign goodness.
First stop was McDonald's.  Roaming can be hard on the children in our center and we want to make it a little bit of a treat so, we pulled into the McDonald's not far from where this young man used to be on the street.  Immediately, three street boys who were there directing traffic for money recognized him. They ran to him and started hugging him and asking him where he had been. We invited these three inside to have lunch with us and when they understood that we were from a ministry, they started to open up and talk about their own lives. 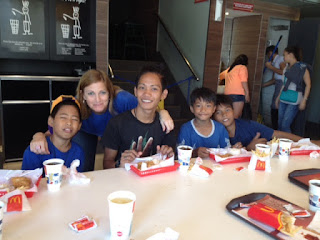 These boys shared their struggles and the brutal crimes they have witnessed on the street. They told us where they sleep and where they spend their days. They broke my heart but they also gave us hope. Despite the hardships they face, they are still very much children with an inexplicable innocence that you can see in their eyes.
My husband prayed with these boys and talked to them about Jesus.  He shared with them that God has a purpose and a plan for every life.  The oldest boy, age 18, was visibly clinging on to every word.
As we were finishing our visit, a lady of about 70 years came to our table. She pointed her finger at our resident, "J" and poked him on the shoulder.  She began to say LOUDLY (I suspect she is hard of hearing) that J is a thief and a drug addict.  She went on to tell us that he sniffs glue and that he is not a good boy.   We all just watched her in disbelief.   J slunk down a little in his chair and stared at the ground.
I simply said "Okay, thank you" and waited for her to leave.  She did.
As we rose to leave, she came back repeating the same story with a little less volume.  My husband told her that this child has a new life now and those things that he did before do not matter to us.

THAT shut her up.     And J heard  Daddy Anthony say this and the relief was clear.
We will not define this child or any of our Mercy House children by the mistakes of their pasts.  Ever.
No Exceptions. 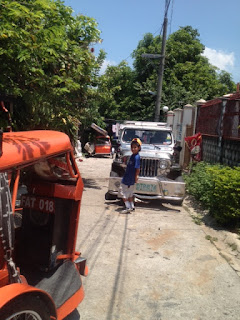 Then it was on to J's last remembered address!  When we pulled up to the area, he did not want to get out of the car.  He was clearly not interested in any reunion!  We assumed it might be because neighbors would recognize him and come out and tell us bad things about him. This has happened to us more than once when roaming with other children.  But this was not the reason.
We convinced him to come and show us the" house".  A woman came out and DID recognize him. But she did not tell us anything bad that he had done.  Instead, she started recounting to us the beatings she witnessed this little boy getting on a regular basis.  She kept saying "your step mother would beat you with a wooden stick" or "your step mother didn't give you food" - things that broke our hearts to hear but, at the same time, we need the true history of this child to make the best plan and deliver the best counseling to him.  The neighbor told us she  herself used to give him food and clothing but his "step mother" would not allow him to have any of it.   She would cut up the clothing and make rags to sell. She must have eaten the food herself based on her physical description. She was NOT starving. He was.
And then our little resident spoke up in a quiet voice and said "hindi step mother. Mama ko."  (not my step mother.  My real mother).
The neighbor was stunned.  She thought this child was being rejected by a step parent, which is all-too-common here, but he was being systematically abused by his biological mother.
And now we understood more fully why he did not want to exit the car.  And why he flinched when Daddy Anthony went to touch him in a joking way. And why he flipped out and yelled when being verbally corrected for a misbehavior. And "why" a lot of things. . .
This helpful neighbor informed us that the family had moved more than a year ago to another barangay - a huge squatter area spanning more than 5 acres that is a maze of narrow dirt paths and homes on top of shacks.   The neighbors wanted to report the abuse many times but, out of fear of J's family, she did not.  We can not fault them for this.  We wish they had reported it but they are poor and voiceless.  Who would protect THEM afterward?
So we went to the huge squatter area.  J pleaded with us not to ask him to roam and we didn't. He stayed behind with Daddy Anthony while my amazing social worker, Love, and I walked hours' worth of hot, smelly streets asking for J's mother at every vendor stand and posting his picture and information on walls and posts with scotch tape and a prayer.
So far, no mother.  So we wait and we keep praying.
But what we gained from this day made every second worthwhile.  We gathered some history. We put pieces in a jumbled, messy frame and helped a very precious boy to have some background where there was so little.  We found some answers that will help us approach this beautiful child with extra caution and understanding.  We communicated to him how important his life is.  He is worth the driving and asking and hot, hot walking.

He is accepted.  And acceptable.
Our prayer for him is the same as for every child in our care.  We ask the Lord to take these hard beginnings and build a beautiful testimony that says to all who hear it:

The master puzzle maker, the ultimate worth-giver, the lover of His own.

Shop Amazon and Help Us, Too.

Give to the work of Mercy House

Salted Caramel To The Rescue!!!

Mercy House and The Esquivel Family would like to thank "Stirred By Hand" for partnering with us to serve orphans and street children in The Philippines. With every purchase of this AMAZING, DELICIOUS, ADDICTIVE salted caramel, a percentage of the proceeds come to Mercy House and helps children. Please click the link below and place your order today! 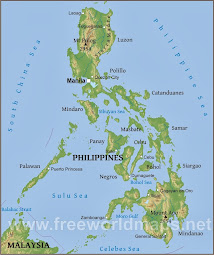 Click the map to learn more about our work